Pregnancy the second time around

In case you’re one of those people wondering, “is your second pregnancy similar to your first pregnancy?” (because I’ve been asked that plenty o’ times) the answer is YES. But also, no. 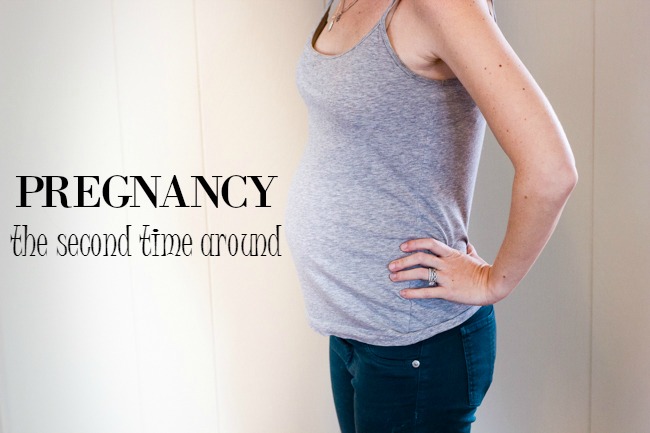 1st Pregnancy: I couldn’t wait to see the bump pop out! I would get so excited every time my skin stretched another inch!
2nd Pregnancy: I still love my bump but all I can think about now is how huge I’m going to be in about 2 more months (if not sooner!)

1st Pregnancy: I really started looking pregnant at the beginning of the third trimester… about week 28.
2nd Pregnancy: I think I already look pretty pregnant at week 20! But I can still easily hide it.

1st Pregnancy: I took bump pictures every week after the 16th (or so) week when I started showing.
2nd Pregnancy: Shoot. I should really start taking those… (see above for my 21 week bump pic! My first ‘official’ one!)

1st Pregnancy: I kept a fairly-detailed pregnancy journal.
2nd Pregnancy: Well, I’m glad I kept one the first time around…

1st Pregnancy: We referred to the baby as ‘Bumpy’ (for obvious reasons).
2nd Pregnancy: We call the baby ‘Baby Beni’ (a shortened version of our last name).

1st Pregnancy: I started feeling Bumpy kicking at 20 weeks exactly.
2nd Pregnancy: Baby Beni was kicking around in there at 15 weeks and I could feel it! I was so surprised because I thought every pregnant woman who said she could feel kicks much before 20 weeks were full-of-it. Whoops. I also think it makes a difference that during this pregnancy my placenta is posterior, whereas in my first pregnancy it was anterior.

1st Pregnancy: I religiously slathered on the coconut oil to avoid stretch marks, and I guess it worked because I got huge and never had any marks!
2nd Pregnancy: Why fix something that isn’t broken?! I’m still swearing by coconut oil during this pregnancy. Except this time I apply it to my boobs as well, because those things got huge when my milk came in and I actually did get some stretch marks when that happened!

1st Pregnancy: During the first trimester I wasn’t working (for most of it) so I stayed home and worked out a bit (Crossfit) but mainly sat on the couch and watched a lot of daytime TV. I also stayed in bed until about noon when I started feeling like a real person again.
2nd Pregnancy: I chased after a toddler and moved across the country in the first trimester. It sucked. It like, really really really sucked. Being pregnant with a toddler is SO HARD in the first few weeks. And by ‘few weeks’ I mean ’20 weeks’. Now, however, I feel so much better and my energy is back and I’m not nearly as drained by Clara and feelings of mom-guilt. THANK GOODNESS I SURVIVED. But we’ll see how the third trimester goes when pregnancy starts getting hard again…

1st Pregnancy: I didn’t have a nesting instinct and barely got the nursery together in time for Bumpy to make an appearance. I also didn’t think about what my life would be like with a baby, I kind of just went with the flow.
2nd Pregnancy: I’m still going with the flow because I’ll be the first to admit that I’m clueless about what it will be like to have two kids and making any plans just means that I’ll have more plans to change later… but I do have big ideas for a nursery! Well, I’m at least thinking about it before week 37 this time.

1st Pregnancy: We saw midwives but actually switched hospitals at 34 weeks because I was uncomfortable with the policies at the original one and wanted to give myself the best chance of a natural birth. (I ended up with an emergency c-section).
2nd Pregnancy: We are seeing an OB who is supportive of a VBAC and the hospitals here are way more supportive and laid-back than any of the ones we experienced in Chicago.

1st Pregnancy: Sore boobs was my first pregnancy symptom.
2nd Pregnancy: My boobs never got sore, but they did get bigger again (YAY!). But Clara is still breastfeeding so maybe I’m just used to my boobs being sore? I have no clue.

1st Pregnancy: I worked out a fair amount in my first trimester (CrossFit!) and I started doing prenatal yoga at the beginning of the 2nd trimester.
2nd Pregnancy: I take walks with Clara almost every day… does that count as exercise?! I really need to start going to prenatal yoga and have been ‘researching’ studios online. Honestly, I’m really, really out of shape.

1st Pregnancy: Time went by pretty slowly.
2nd Pregnancy: I’M ALREADY HALFWAY THROUGH THIS THING! (Although, let’s be honest, Baby Beni is going to be late so who knows when the halfway point is)

1st Pregnancy: I thought we would be having a boy at first, then towards the end of the pregnancy I was convinced it was a girl. (Of course I was right.)
2nd Pregnancy: I have no freakin’ clue what this baby is.

1st Pregnancy: I talked to Bumpy all of the time and thought about things such as, ‘should I be listening to classical music?’
2nd Pregnancy: These thoughts never cross my mind but I do talk to Baby Beni occasionally.

1st Pregnancy: I ate what I wanted (but felt some guilt when it was a food I wasn’t ‘supposed’ to be eating or when I realized I had been surviving solely on carbs for weeks).
2nd Pregnancy: I eat what I want and feel ZERO guilt about it. I should note, though, that I generally eat pretty healthy, I just don’t worry about my fruits and veggies as much as I did the first time.

1st Pregnancy: I was really, really stressed out the entire time. I would freak out before every doctor’s appointment and could barely sleep the nights before we heard the heartbeat for the first time or saw any ultrasound.
2nd Pregnancy: I have full confidence that everything will be fine and if it’s not, I know there’s nothing I can do about it and it’s in God’s hands. I feel an enormous amount of peace about the health of Baby Beni.

1st Pregnancy: We ‘accidentally’ got pregnant a little sooner than we thought we would. I was charting, and we timed sex to see if we could successfully time it near my ovulation date, but we had assumed it would take us a few months (at least) to get pregnant and so we weren’t really planning on really starting to try seriously until quite a bit later (because we had trips we wanted to go on first! Trips we ended up canceling once I got pregnant. Wah wah).
2nd Pregnancy: I have no idea how we got pregnant! We definitely weren’t trying. More on this in a later post.

1st Pregnancy: I could NOT have been more excited to be pregnant and to start our family.
2nd Pregnancy: I can’t wait to add a new little person to our family. The very thought of Tim with two kids on his lap is enough to make my heart explode. I can’t wait to see Clara interact with a sibling (she loves babies) and to go through all of the newborn and baby stages again… Seeing any newborn outfit makes me start tearing up with happy tears. Now that I know what to expect, I’m actually MORE excited to have a baby than I was the first time around. And also I’m still terrified.

To sum it up, my pregnancies have been very, very similar physically, but this second pregnancy has been really hard because the fatigue and nauseousness have been more difficult to deal with now that I have Clara to take care of! Plus, the whole moving across the country thing has been really hard on our little family (in terms of getting things done, it’s been a great experience overall!). However, I feel very equipped and confident in my body (I’ve already done this once!), so this pregnancy has been filled with a lot of peace. Also, I have many more mom friends now, so I have a lot more support and people to talk to about all things pregnancy and babies! It has made a world of difference. Overall, I love being pregnant (now that the first trimester is far behind me) and I’m anxiously anticipating the next few months!

Did I leave anything out? How did your second pregnancy compare to your first?

This entry was posted in pregnancy and tagged 21 weeks pregnant, pregnancy. Bookmark the permalink.

14 Responses to Pregnancy the second time around