You know how you have those weeks when parenting seems easier because your kids are sleeping and eating and not whining (much) and things are falling into place and you almost think about having another kid because you finally have your own figured out?

Well, those moments last about 6 hours here. If even. 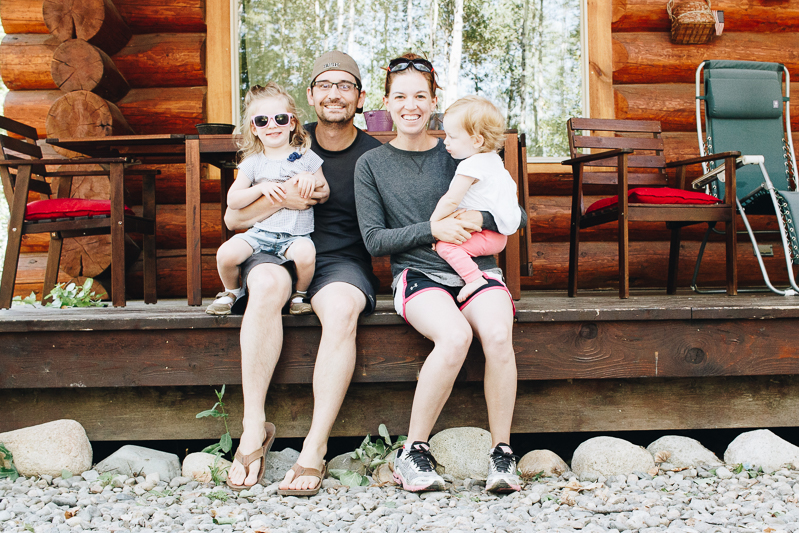 The vacation version of ourselves take casual to a whole new level… (and this photo/caption is unrelated to this post except that it has our family in it, so I’m still going with it.)

We really thought we had Clara’s sleep figured out months/years ago. For a solid year she was going to bed at a reasonable hour and waking up at a reasonable hour and sleeping for up to three hours in the afternoon. It was glorious. (I mean, we still weren’t sleeping much because I was pregnant and had a newborn in that time… but at least one person in our house was well rested!)

Then Clara turned 2.5 years old and it all changed. She started staying up late. As in 11pm every single night, if not later. I tried shortening her naps, but this made her super cranky, and she still went to bed around 10pm, so it wasn’t worth it. Until recently, we’ve been surviving like this, but barely. With the kids not napping at the same time in the afternoon (if at all), I had no time to get anything done, plus with a toddler awake until our bedtime, I was staying up way too late (until 1am or 2am) to do the things I wanted to do. It was chaos. Not to mention that Isabelle would still wake up sometimes during the night (darn you, teeth!) and as early as 5am in the mornings.

So many sleep problems for these babes o’ ours.

If you haven’t tried sleep ‘training’ two kids at the same time… let me tell you, it isn’t fun.

Bottom line: after realizing that our family could not thrive with this late toddler bedtime, and seeking some opinions on the topic, I decided to drop Clara’s naps completely.

It has made bedtime easier but our days loooooong. I try to have her do quiet time while Isabelle is sleeping, but it’s not so quiet (to say the least). I no longer have any time to myself during the day, and sometimes I just need time to zone out, away from toddlers. It’s been rough. Plus, Clara sometimes emotionally falls apart at around 4pm because she just can’t handle not sleeping.

So, going forward we’re going to try realllly early bedtimes for both girls. Like, 6:30pm early. This seems crazy to me, but I think Clara needs a good 12-13 hours of sleep a night and I need to make sure I give her that time.

It’s a hard season over here.

And I know it’s just a season, but it’s hard. I’m optimistic that we’ll get this figured out, though.

I know some kids transition from one nap to zero naps in  just a few weeks, but we’ve been battling this for months and months. Maybe if I had really pushed her to skip a nap earlier, she would be adjusted by now – who knows.

The point is, I was a clueless mom in January and thought my kid was suddenly broken because of the late bedtime. I thought that when toddlers ‘dropped naps’ it was because they suddenly refused to take them – and the idea of forcing Clara to stop napping seemed crazy to me. She was so energized at night and running around and happy (at 11pm) that we just didn’t think to skip her nap and put her to bed early – because she was doing really well on her current schedule.

And the OT (occupational therapist) that I take Clara to suggested that it might be best for Clara if we continue doing a nap and accept the late bedtime. BUT, that doesn’t work for our family, so we’re attempting the next best thing. She said that some kids go through this transition for years where they need a nap during the day but push bedtime later and later. We cannot handle this cycle for years.

Something to think about: if you are a toddler mom and notice your kiddo is going to bed later and later and later, and still taking a nap, it may be because they’re ready to drop it. (Which is not a fun realization if you love naptime in your house for your own sanity.)

I am envious of all parents who have naturally easy sleeping babies/toddlers! It has been our most frustrating aspect of parenting by far!

Did you need to drop your toddlers’ naps or did they do it themselves?

This entry was posted in motherhood and tagged motherhood, naps, sleep, toddlers. Bookmark the permalink.