One of Those Moments

This is my first week as a stay-at-home mom, and guys, it is hard. Like way harder than I even thought it would be.

At any given moment I can’t decide who my favorite child is – the whining toddler who is destroying my house or the screaming newborn who can’t get herself to sleep and who won’t let me put her down?

Motherhood is messy. And it’s exhausting.

But then came a moment. (I feel like all moms must know this moment, the moment when motherhood is worth it. A moment that God gives us moms to inspire us to keep on going through the tears and messes and tantrums and diapers.) 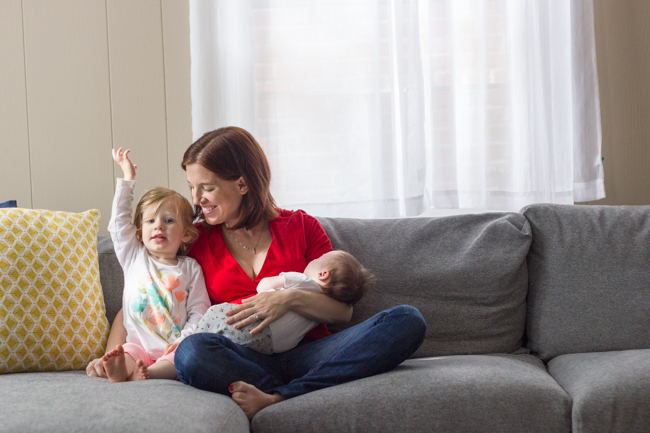 The other night Clara woke up a few hours after we had put her to sleep. She needed to go to the potty, so I took her and then, instead of putting her back in her crib, I decided to sit with her in the rocking chair for a while. I needed a break, and I also needed to connect with my independent toddler.

Since Isabelle is usually attached to me and Clara has a strong preference for Tim when he’s at home, it was a rare moment – just us two. My oldest daughter and me.

She let me hold her in my arms and was totally still, which is quite the rarity. And then she looked up at me, and in her eyes I saw a child instead of a baby.

There may have been tears shed.

My baby isn’t my baby anymore, she’s my “big girl” as we often tell her. Isabelle is my baby. But the secret that I don’t tell her is that Clara will actually be my baby forever, too.

After a few minutes, her head started getting heavy and I reluctantly put her into her crib so she could get some rest (and because – if we’re being honest – my arms were tired). She fell right asleep.

There is nothing sweeter than a sleeping toddler, of this I’m convinced. It’s hard to believe that such a peaceful little being can cause so much chaos in her waking hours!

So as I spend my week chasing Clara while pacifying Isabelle, I’m fueled by the knowledge that this is a season and babies grow up and that there are rare moments of true joy and peace to be found in the midst of this current chaos. Sometimes those moments come when we’re playing, but oftentimes the moments come when we’re doing nothing special at all – when I’m answering yet another cry in the night that could have further worn me out, but instead fueled my spirit.

This entry was posted in clara jane, loved ones, motherhood and tagged motherhood. Bookmark the permalink.

6 Responses to One of Those Moments