An alternate title to this could be: traveling with kids is never boring.

So because of our really busy schedule and Isabelle’s refusal to sleep like a normal human being, Tim and I were really last minute (even by our low, low standards) in thinking about our Thanksgiving plans.

We enjoyed an awesome ‘Friendsgiving’ the Sunday before Thanksgiving (I made this green bean casserole and these rolls), but in terms of celebrating the actual day… our brains didn’t even have the capacity to think about it ahead of time. 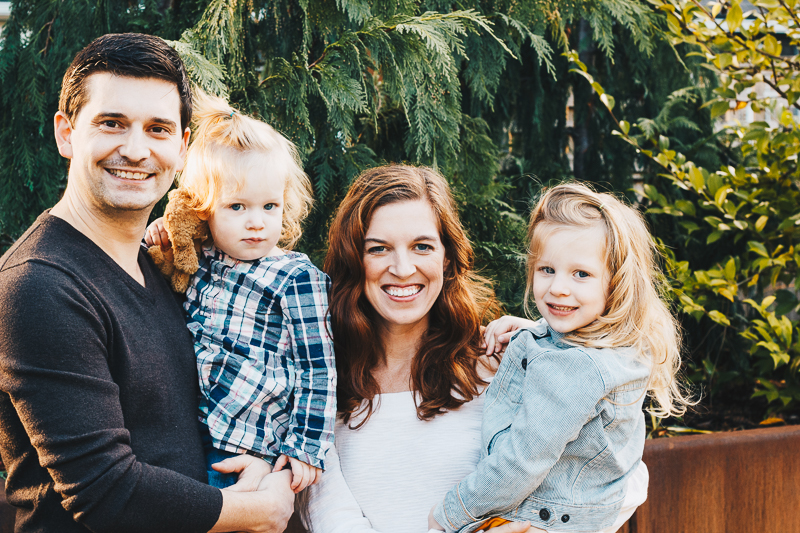 Luckily, our friends are very welcoming hosts so when we told them we’d decided to join them in Portland for the holiday, they welcomed us with open arms! (Well, that’s how I interpreted it. Basically, they didn’t kick us out or tell us we couldn’t come. They are good friends, indeed.)

I knew we were off to a rough start when Isabelle didn’t sleep the night before. Which meant none of us slept.

Then Tim pulled out of the driveway on Thanksgiving Day with our tire pump still attached to the car, and ran that thing right over. (I guess now I know what I’m getting him for Christmas!)

The ride to Portland was surprisingly uneventful until the last hour, when Isabelle decided she was done being in her carseat. But still, almost 3 hours of peace may have been a roadtrip record since Isabelle was born!

We had the most delicious food on Thursday evening – and I cooked none of it. (Did I mention we have fantastic friends?) I was so, so stuffed. I didn’t even finish my piece of pie, that’s how much dinner I ate! I know, tragedy.

Unfortunately, one of our friends got sick on Thursday night and all day Friday, and I’m sure having three toddlers running around the house did not help her to feel better. But, the rest of us carried on with the visit and went to an indoor playspace for coffee and a toddler lunch, and then went to a nearby outdoor playground after naptime.

Our eventful trip continued with us finding a lost dog on the way to the playground, which led to us asking everyone we saw if they recognized him. We eventually took him to a vet and, after quite a few phone calls, were able to reunite him with his owner. (Note: when I say ‘we’ helped this dog, I mean that my friend helped this dog while I tagged along for the ride. I wrangled my kids while he did all of the dirty work.)

That night we ate some light soup, as we were still suffering from a Thanksgiving food hangover.

Then on Friday night Isabelle decided to wake up (per her new usual routine) at about 10pm and scream for two hours straight (with us going in every 10 minutes to calm her down). She was so upset she threw up, which was a whole ordeal. Tim was super-dad and cleaned her up in the shower, did the laundry, and slept with her on the floor of the basement (so that she didn’t throw up again in our bed, which would have left us all without places to sleep). It was a rough night, but more for him than me, I must admit. The next day she felt completely fine and we were all exhausted – as it always goes!

Our last day in Portland we went shopping and out to lunch and enjoyed a rainy, gloomy day inside. We left right after dinner (we ordered in from our favorite place, Bollywood Theater) hoping that the kids would sleep in the car. And our plan worked! Which never happens! Well, I should say that our plan worked only after we listened to about 800 rounds of ‘Jingle Bells’ and Clara asked a bijillion questions about the lyrics. But then, bliss! Tim and I even managed to listen to a full podcast episode without being interrupted!

I wish I could say that’s how our night ended but we all know that would be too easy. As soon as we got close to home Isabelle started stirring in her sleep, and when we transferred her to her bed she decided to start up with the screaming. Another two hours later… she finally went to sleep.

And so ended our way-too-quick 48 hour holiday trip to Portland!

It was a whirlwind, but it was fun. Although, seriously, traveling with toddlers is challenging. Although I think Clara is finally at the age where it’s a bit easier, since she gets excited to sleep in new places on her “blow-up bed”. I dream of the day when we travel with both kids and don’t have to worry about nap and sleeping schedules!

This will happen for us one day, right?!

In the meantime… let’s all cross our fingers that this ‘phase’ Isabelle is going through is the dreaded 18 month sleep regression that shall pass quickly. She has never been a good sleeper and it seems like every time we get the hang of things, she switches it up on us! We really don’t know what else to do about it, but I’m going to be really, really strict about naptimes and bedtimes in hopes that this will help her.

I hope you had a wonderful Thanksgiving with lots of yummy food and laughter and minimal drama (and puking)!

This entry was posted in holidays, loved ones, travel and tagged holidays, thanksgiving. Bookmark the permalink.