It feels like Phoebe has been a part of our family forever, so it feels very belated to be writing her birth story… but in actuality, it’s been a short seven weeks! It took me a year to write out Isabelle’s birth story so I feel like I’m way ahead of the game this time. (#momwin!)

At the beginning of April I wrote about my anxiety going into my third c-section. Well, I’m happy to report that things went really, really well! 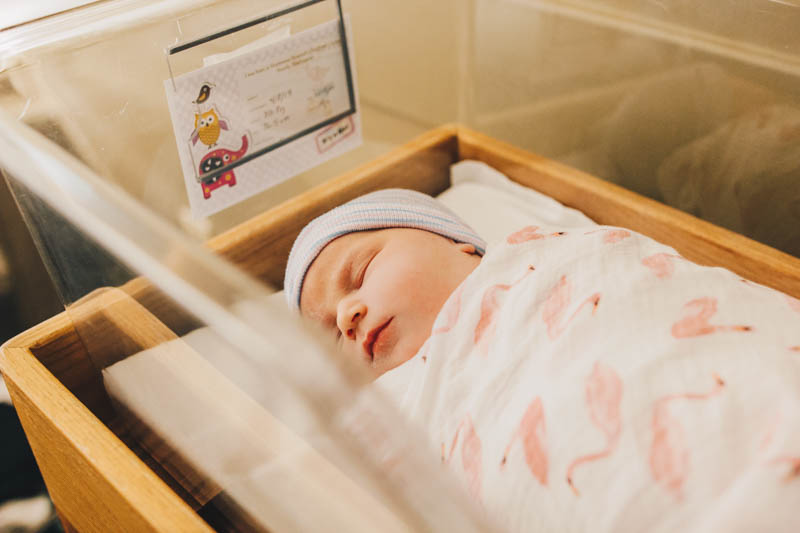 Starting at the beginning….

I expected to feel so much anxiety that I wouldn’t be able to sleep the night before, but I slept fine and woke up ready to go! Although, because I’m a huge procrastinator I was still trying to organize things around the house and pack a hospital bag a few minutes before heading to the hospital. This is not surprising, though. Anyways. We arrived at the hospital 2 hours before the c-section and checked in and chatted with the nurses forever, answering all of the bijillion questions they need to ask.

We also met with the anesthesiologist briefly so I could explain to him my last few L&D experiences (which he knew about from looking at my chart) so that we could all be on the same page that this delivery HAD to go better than all of that drama.

Finally, they gave me a gown and hair cover thingy (that’s the technical name, right?) and Tim a hazmat suit (Scrubs? Clothes coverer?) to wear into the OR and then we waited. And waited. And people came in every once in a while to tell us they were still waiting on someone or other who wasn’t where they were supposed to be. Tim and I made small talk and kind of scrolled our phones and at some point I tried to read from my Kindle, but it’s a little bit strange to wait around in anticipation of your baby being born! 30 minutes after our scheduled procedure time we finally walked into the OR. It felt a bit surreal to not be in labor yet still walking in to have the baby.

When I got into the room, a lot of people introduced themselves and the anesthesiologist placed the spinal block. In case you haven’t done this before, I basically sat on the operating table and they had me bend way over (maybe I held a pillow? Or maybe I’m just remember hunching over my bump?), placed a clear sheet of something that feels like saran wrap over my back, and put in the needle. I think they also give a local anesthesia? It just feels like pinching and a little burning – nothing too bad. My OB was there to rub my shoulders and tell me I was doing a great job, because Tim had to wait outside the OR until they were done giving me the anesthesia. Then as soon as the anesthesiologist was done they instructed me to quickly lay down on the table so that the drugs would distribute evenly to the lower half of my body.

Within a few moments my legs felt heavy, and then I couldn’t feel my lower half at all. They did some sort of ‘pinch test’ and declared I was ready to go! (They also commented on how well they could see the baby move and how they could tell which parts of her were squirming in there as I was lying on the table… it was surreal knowing she was going to be out in just a few minutes, and she was obliviously just hanging out in there!)

Everything happens so quickly with a c-section. They had the blue drape up just below my shoulders in no time and got to work. The anesthesiologist and Tim were both by my head so I could report any discomfort I was feeling. Tim was pretty nervous so he just held my hand. Actually maybe he rubbed my forehead? Who knows what he was doing. He was there, and that was enough! Husbands are kind of the most useless person in the room during the whole procedure, now that I think about it. I actually felt really comfortable during the actual surgery. Once I told the anesthesiologist I was nauseous, and he fixed it right away. Another time I told him my chest felt heavy, and he reassured me that was normal and it went away quickly, too.

Eventually (after about 15 minutes, probably), they announced the baby was coming out and they dropped the blue drape and a clear one remained up, so I could see the baby being lifted up. (This is part of the “gentle c-section” that my hospital offers) Tim announced she was a girl because 1) my eyes were filled with tears and 2) I didn’t have the best angle to see all of the parts. (He also said that he could see my abdomen being held open and some parts of my insides… Thankfully from a laying down position I couldn’t see any of that, because then I really would have been feeling nauseous!)

Phoebe was born covered in vernix (so she looked super white), and crying, which gave me a huge sense of relief. She was immediately put on my chest, and it was just the best. Although, when I say “chest” I really mean she was kind of put on my neck like a scarf. It’s really awkward. But at least I was able to touch her!

So that was that! They closed me up, I held my baby as best I could, Tim and I were super, super happy, and eventually they lifted me onto another table so they could wheel me into my room and everyone in the hallway could say “congrats!” which was super sweet.

And then the recovery began! More on that later, though.

This entry was posted in Phoebe Mae, pregnancy and tagged birth story. Bookmark the permalink.