The transition from two to three kids

One of the most asked questions of my life is, “how is it going with three kids?” This question is usually followed by, “…because we’re thinking of having another one but I’m not sure…” To which I respond, “well, are you planning on your third kid being super easy?! Because if so, you might be okay!”

It’s hard to answer how the transition is into parenthood and then into being a family of four and now going from two to three kids… because it’s all so personal! Years ago I wrote a blog post on how the transition was from one to two kids. (Spoiler alert: it was hard.)

My initial thoughts on going from two to three kids: It’s been easier than going from one to two. 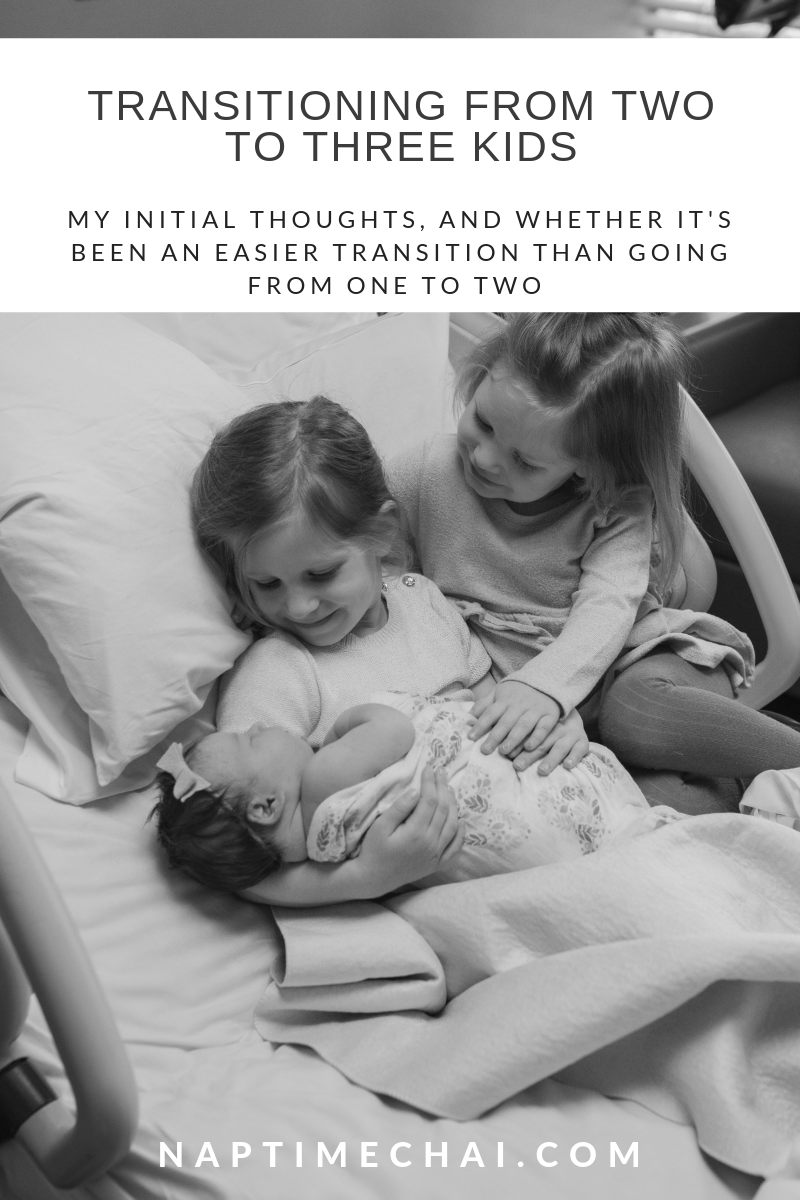 + Phoebe is an easier baby (than Isabelle was).

Generally, Phoebe is a happy baby. Of course she has her moments (oh hey, teething!) but she loves smiling and can be by herself for a pretty good amount of time without requiring much attention. She sleeps well in the car and has always only woken up 1-2 times per night. She loves being worn and is easy to take out and about. Basically, she’s the best. But I mean, it’s still a lot of work, because she is a baby!

Having a 21 month old and a newborn is the worst. Or at least it was the worst for me. Clara was a really energetic toddler who got into everything, and Isabelle was a really fussy newborn/baby so the combo of the two frayed my nerves for YEARS. I mean, they’re still challenging at 5 and 3 years old! But whenever someone asks me how it is going from one to two kids I ALWAYS say to try to have a 2.5-3 year age gap… 21 months might work if you have two easy kids, but if that isn’t the case, it might just be really hard for a while.

+ I have more support.

My mom friends are what get me through life! They know all of the tips and tricks and no matter what I’m going through, one of my friends has had a similar parenting experience. I feel like I have so much wisdom surrounding me these days.

+ I know what to expect.

I am so aware now that all things are only a phase, so in the good times, I know that it probably won’t last, and if things are going badly with Phoebe, I know it won’t last! This makes everything seem less intimidating/overwhelming! I know how quickly the baby phase ends and I’m already emotional thinking that Phoebe is getting older each and every day! I’m definitely more thankful for our current phase because I know how short it will be and I also know how much harder it will be when she can start moving around on her own!

Some things are harder, of course. To state the obvious, we are outnumbered by our kids now! Also, Phoebe is not a great eater, which took me by surprise. She was a great nurser originally, but somewhere along the lines, I think she got lazy. She doesn’t love latching and won’t even hang out on my boob for comfort reasons. I don’t get it! This means I’m pumping a lot more than I did with my other two, in addition to breastfeeding, so it’s all taking a lot more time than I’m used to and it’s pretty stressful! Other than that, it’s just a challenge getting out of the house, but luckily I’ve had Tim home for 12 weeks to help with that… and now we have an au pair to help, too! (More on that in another post, though.)

Overall I would say that the transition was harder from one to two kids. Even if Isabelle had been an easy baby, I still think it would have been a difficult adjustment to figure out how to handle multiple kids, multiple nap/eating schedules, and just the mental load of a bigger family. Going from two to three kids, however, feels like added chaos, but not anything super new or intimidating.

If you’re thinking of having a third kid, just go for it and see what happens! But don’t blame me if it all goes horribly awry 😉

This entry was posted in family, motherhood and tagged motherhood, three kids. Bookmark the permalink.