Over the past few months I’ve noticed something about 90% of the parents at the playgrounds we frequent: they don’t let their children climb the slides.

Their kid will go down the slide and turn themselves around to climb right back up, and more often than not the parents will immediately intervene, telling their child that slides are meant for sliding down, not climbing up. 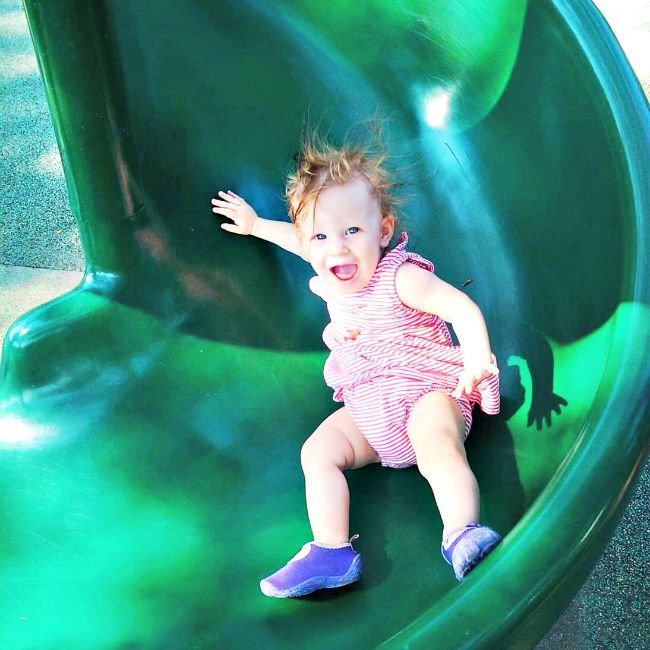 I don’t think there’s anything wrong with this but Tim and I do it differently. Clara has always tried to climb up the slide (before she could even walk consistently she was trying to crawl up the slide) and we’ve always just let her. It was a proud moment for us when she got to the top! She tried so hard and it took her a while, but she did it.

For me, I just don’t see the point of telling kids not to climb playground equipment – isn’t that what it’s there for? Of course I watch her closely and I don’t let her climb up the slide if there’s a kid waiting to go down it, but otherwise I let her play however she wants to play.

I try to intervene the least I can when it comes to her play time and I like to think this helps her gain confidence, independence, and a sense of adventure. I don’t want to bog down her little one year old mind with arbitrary rules. The only ‘rules’ I care about at this point are the ones that serve to keep her safe. (Well, and I’m trying to get her to stop throwing her food on the floor, because it’s driving me crazy, but that’s a whole different topic.)

It’s strange how being a parent makes you notice things like this – the little things you do differently than other parents. Of course, I think all parents should do what feels the most natural and right to them so if you don’t want your kid climbing up the slide, don’t let them! But if you (like me) allow your kids to climb up the slide and feel a bit awkward when you see other kids getting scolded for doing the same thing, I hope you keep doing what you’re doing with confidence knowing there are some other parents out there who don’t mind bending the ‘rules’ every once in a while.

This entry was posted in motherhood and tagged motherhood, parenting, playgrounds. Bookmark the permalink.