Where I am (mentally) right now as a toddler mom.

Am I allowed to say that I don’t think being a toddler mom is for me?

Because I’m not sure it is.

I’m more of a newborn/baby person. I freakin’ love newborns. I could cuddle a baby all day and night. I can even handle a lot of the sleep deprivation. I loved the breastfeeding and the holding and the snuggling and the constant naps she used to take… Granted, Clara was an ‘easy’ newborn (so other moms told me), but I always knew I would love those first few months, and I did.

Then Clara became mobile (starting at 7 months when she began crawling) and life changed. Gradually, motherhood got a lot harder for me. Now that this girl is running all over the place and has opinions, motherhood is even harder. (And we aren’t even close to the ‘terrible twos’ or threes or whatever the ‘hard’ ages are supposed to be!)

For instance, today Clara cried because… 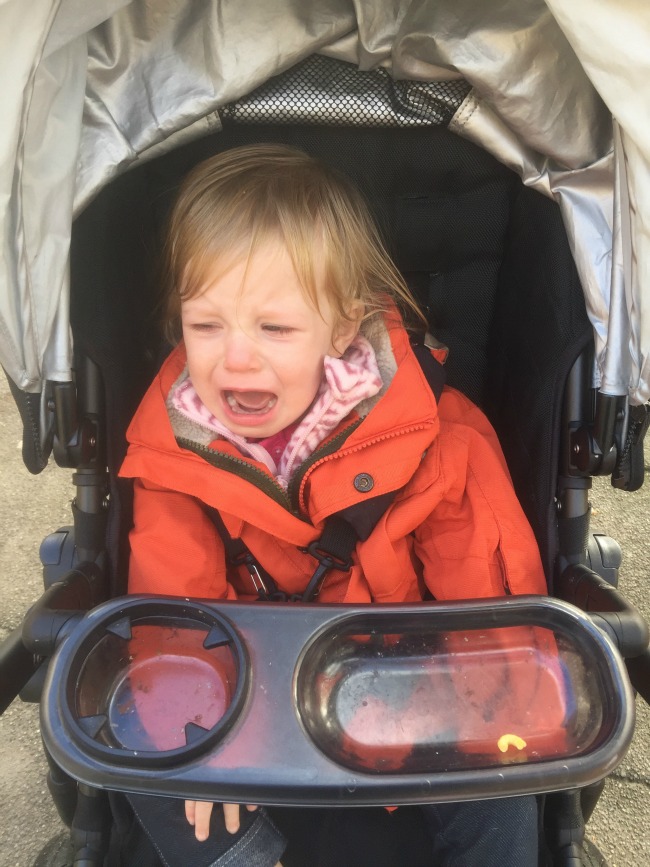 Can you believe I had the audacity to order (and drink!) a chai tea latte in front of her without letting her drink any?! The nerve.

… And that was just in the afternoon/evening. I blocked out everything that happened before her nap.

Don’t get me wrong, there are some wonderful things about this stage of life. Clara just started saying “mommy” (FINALLY. She’s been saying ‘Ozzie’ for months) and it is the sweetest sound I’ve ever heard. She’s starting to understand a lot of words and if we ask her to do something she can (sometimes) understand it. She loves to read and point out what objects are in her books. She knows what sounds dogs make and spontaneously starts ‘woof’ing. She loves to walk around our neighborhood and is getting more and more independent with things she wants to do herself. She points at photos of Tim and I and says ‘mommy’ and ‘dada’ and thinks it’s the most fun thing in the world. She is so busy with her toys and constantly moves from one thing to another. She is fascinated with pointing out body parts – especially her belly button.

Basically, her brain is working overtime and it’s both fascinating and exhausting. I’m so proud of what she can do and how fast she is learning, but at the same time I can only handle so many hours of a clingy toddler who wants me to entertain her every second of the day and goes from elated to miserable in .5 seconds for no discernible reason. Thank goodnesss for play dates!

The point is, I’m really, really trying to savor every moment of this time in her life, because I know it’s fleeting. And some days it’s easier than others. I’ve tried to keep the TV off during the day and I’ve also tried to minimize the time I spend on my phone. It’s useless for me to even take out the computer, because once the laptop comes out she is all over it. I’m attempting to be 100% focused on Clara when I’m with her, and I’m rewarded with a lot of sweet moments. But I also think this whole (stay at home) mom thing is harder right now than it was even a few months ago.

I’ve told Tim that I would gladly continue procreating if I could raise the child(ren) for the first year and he could take it from there… but he hasn’t quite gotten back to me with a final verdict on that. I’m crossing my fingers he goes for it.

I guess what I’m trying to say is that I feel guilty that this phase of motherhood is not my favorite thus far. I love Clara and I love seeing her change and transition and I love being her mom, but this stage does not come naturally to me. I’m trying to offer myself more-than-a-little grace for right now when I lose my patience or fail to see the joy in an especially frustrating moment.

I know that one day I will look back on these months and wish I could experience them all over.

And then again, maybe not.

This entry was posted in being introspective, motherhood and tagged motherhood, parenting, toddler mom. Bookmark the permalink.

13 Responses to Where I am (mentally) right now as a toddler mom.