Another one of those days (with two under two)

(The title isn’t even true anymore. Now I have two kids two-and-under but it just doesn’t have the same ring to it and I’m trying to prove a point, darnit. Or maybe I’m just in denial. Whatever, I have two babies and they will continue to be babies until I’m ready to graduate them along.)

I had one of those days last week. It was so bad that I couldn’t even write about it right after it happened.

Not bad like worst-day-of-my-life bad, but bad as in I-would-rather-not-repeat-it bad. 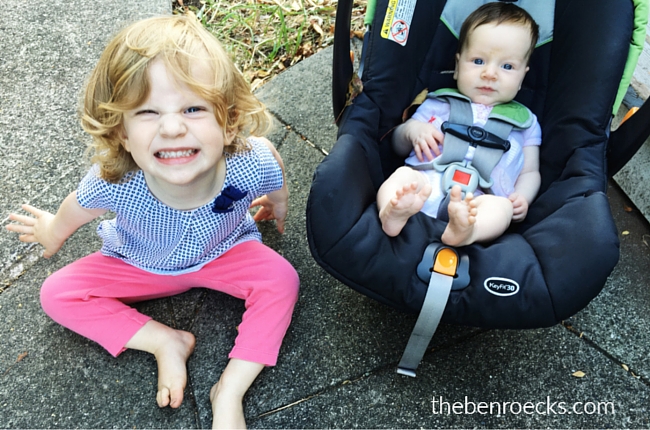 Clara’s picture smile cracks me up. We’ll stick to candids in the future.

Let me set the scene.

I was quite smug, starting out. A friend and I had plans to meet at the neighborhood park and then another friend texted me to ask if I wanted to meet her there, as well. So all of a sudden we had 2 mom friends and 4 little kids to meet up with, which is a great day for me, Clara, and Isabelle! Anyway, I got out of the house before 10am, hence the smugness. I even almost posted a Snapchat (shameless plug: username lisabenroeck) of my ‘achievement’, but thank goodness I didn’t because it all went downhill from there and I should have known it was going to happen.

As I left the house I called Tim to ask if he had taken Clara to the potty recently. Of course, he hadn’t. Whoops. Well, we got to the playground and I asked Clara if she had to pee. Of course not, mom! (Is what she would have said if she wasn’t too busy running to the park to bother responding to me.) Well, I scooped Isabelle out of the stroller and ran after her so I could watch her scale a ladder. Halfway up said ladder, what does she do? She pees!

Well, I gave a little yelp, which attracted the attention of moms around me, who then proceeded to glare (well, that’s how I interpreted it) at us as Clara continued peeing. There’s no stopping that flow.

I calmly told Clara that we then had to go to the actual bathroom, but of course she was in no hurry whatsoever. By this time, Isabelle had decided to become hysterical for no apparent reason (typical of my fussy child), so I put her in a wrap while Clara chased a squirrel. I finally convinced Clara to abandon the squirrel chasing mission and walk towards the potty, but unfortunately the bathroom at this particular playground is about 100 yds away and it takes a toddler approximately 103 minutes to walk there, and much longer when that toddler has decided she is in no hurry at all. And those few minutes feel like an eternity with an attached baby screaming her head off.

Finally, we reached the public park bathroom. It was about 95 degrees in there, which is puzzling since it was only 65 degrees outside. I was wearing my favorite backpack (which acts as my diaper bag) on my back, a screaming Isabelle on my front, and I was dragging Clara by the hand as she counted to 10 over and over and over. “1-2-3-4-5-6-7-8-9-10!”

I finally lifted Clara on the potty where she sat. And sat. And sat. Doing nothing, of course, since her bladder had been emptied on the playground woodchips. But did Clara want to get off the potty? NO. No she did not. Instead she wanted to continue counting and telling me that the toilet paper was “hiding on the wall” (in the dispenser). Meanwhile, Isabelle was hot and at the point of not being able to breathe because she was crying so hard and so loud. The sound was echoing off the bathroom walls and I was losing my mind as I calmly asked Clara if she could possibly be done yet/already. I probably didn’t actually sound calm at this point though, I was probably actually yelling to be heard over Isabelle. Clara, however, was (per usual) totally unaffected by her sister’s hyperventilating.

FINALLY Clara decided she was done (doing nothing), and at that point I began to question how I was going to change her pants and underwear without having her be barefoot on the gross public bathroom floor. And how to avoid putting the backpack on the floor (since of course there wasn’t a hook in the stall).

In retrospect, I should have just gone right out of the bathroom and changed her outside in the grass. But no, instead, I squatted in the stall, took Clara’s clothes off (so she had to be barefoot, much to my dismay), rummaged around the backpack which was also on the floor, found new clothes, and quickly put her in them.

All the while, my short arms had to reach around Isabelle who was still being worn and not at all happy about it. (But seriously, thank goodness for babywearing in general because there was no way I could have managed this without my wrap!)

FINALLY we were done and although the bottom of my backpack was covered in some mystery white powdered substance and Isabelle was bright red and beyond upset and my eardrums were ringing, we were able to leave the bathroom. Clara practically skipped down the stairs. I swear, nothing gets to her.

At the park we met up with our friends and I realized I was supposed to meet one of them at breakfast nearby and not the actual playground, but evidently I can’t properly read texts before noon. Whoops. And double-whoops because I hadn’t even eaten breakfast (except for a leftover cupcake… don’t judge me too harshly) so I was starving and embarrassed.

Well, the rest of the morning was spent with my friends watching their kids plus Clara as I tried bouncing Isabelle, feeding Isabelle, changing Isabelle…

At one point, I kid you not, I was breastfeeding Isabelle (half topless and holding her to my chest with one arm), while pushing our huge double stroller through the grass, trying to get to Clara. One playground mom saw this in action and told me I was a “Supermom!” and another commented that I should maybe get a sling to make it easier. I smiled at the one and ignored the other, which was probably rude, but even well-meaning comments make me want to lose my mind when I’m only half-dressed and clearly a bit flustered.

It was at that time when I realized I had lost all control of the situation and we needed to leave before I actually abandoned my children with my friends and ran home by myself to cry into a bowl of ice cream. That seemed like a viable option at the time.

Needless to say, we all survived the ordeal. Isabelle stopped crying and passed out on the way home, Clara ate lunch and took a nap, and I fell onto the couch and had that bowl of ice cream (even though I wanted wine).

And all of that happened in 2 hours. TWO OF THE LONGEST HOURS OF MY LIFE. Honestly, when I was in that bathroom stall with both girls with the smells and the noise and the heat, I really felt like I was getting a glimpse of what hell must be like. (Dramatic much, Lisa? YES.)

Just another day in paradise as a mother of two.

This entry was posted in imperfection, motherhood and tagged motherhood. Bookmark the permalink.