From now on I’ll be shopping exclusively online.

Last week I tried to send in my resignation letter (from being a SAHM) multiple times before Wednesday.

It was a rough few days. 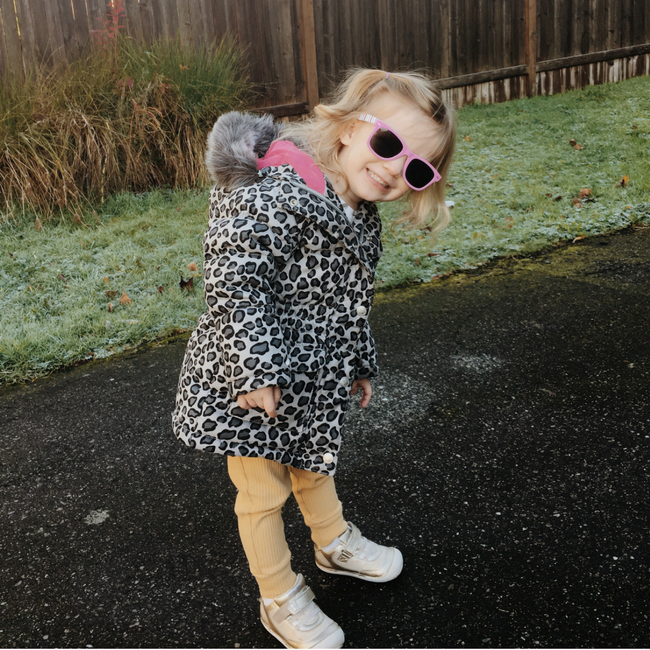 Monday was 100% whine time. Putting on shoes? The end of the world. Coat? Heck no. Getting in the car? Tragedy. Eating any food? Not happening. Stop hitting Isabelle? Why would I even suggest that?! You get the idea. My nerves were wearing thin and I was so happy when Tim got home that night.

And then Tuesday started out better so I thought I’d take advantage of Tim working from home to take Clara shopping for a little mother-daughter bonding time while we left Isabelle with her dad.

It all started out fine. We went to Target and Clara was well-behaved and sat in the shopping cart and everything was going swimmingly.

All of this changed when I got overly-confident and decided to go to Old Navy to return some things I had bought online during Black Friday.

Rookie Mistake #1: Deciding I could run multiple errands in one day with a toddler in tow.

Rookie Mistake #2: Deciding Clara should walk from the parking lot to the store (located in the mall) instead of using a stroller, in hopes that it would tire her out.

First Clara ran all around the store. Typical. Then we stood in line for our return and Clara was not understanding the concept of staying in the line. She escaped my hand-hold grasp to continue to run around the store. Awesome. I had no idea how a mother of the year would respond (and my goal is to be the mother of the year, obviously) so I left the line and went to grab her (as she was hanging out with the mannequins in the store window) and gave the other patrons (still standing in line) apologetic smiles as I got back into the line. So that was fun.

Then we finally got to the cashier and the cycle continued. She ran out of the line, out of the store, and into the mall, so I had to leave all of my things at the register to go find her. Multiple times.

I’m sure the other customers in line really loved me by this point. Especially since the line was growing longer and longer. I brought her back into the store and she ran again. This time I dragged her back by the hood of her jacket as she laid on the floor laughing hysterically.

You may be thinking to yourself, “lady, why can’t you control your kid?!” Believe me, I was wondering the same thing. I tried holding her, but holding a flailing toddler while trying to get out a credit card and complete a quick transaction is just too difficult, apparently. Originally I had such optimistic hopes that when I put her on the ground she would remain next to me. How naive I was.

The third time she ran away I hastily scribbled my name on the credit card machine thing (that’s the technical name), grabbed my things, and ran after her, vowing to never step foot in that Old Navy again. Clara wasn’t hard to find in the mall concourse since she was gleefully screaming and running as mall patrons stopped to watch her (to make sure she actually had a caretaker, I assume).

Multiple people said “Oh, God bless her!” as I passed by, which I assume meant “gosh lady, you really have your hands full. Maybe you should stay out of malls.”

I love her spirit, but boy-oh-boy is Clara exhausting! She is not my sensitive child and is really happy running away and not listening and completely ignoring any stern lecture I might try to give her. I’m still learning how to mother her well.

The whole point is. We survived. But not before she ran into a bank (the quietest place she could have possibly gone in a mall), threw herself on the ground, and laughed hysterically while I attempted to pull her out of there.

Basically, I was a mess. But since I did manage to run two errands, I’m considering the day a success! (This is how low my standards are now, people. This day was considered not-too-terrible even though Clara didn’t listen at all and behaved crazy in public.)

But still, that was me with one kid and it made me think that I’m clearly not cut out for this SAHM of multiple kids thing. I can’t even imagine how the day would have gone if I had Isabelle with me, too! So, we’re going to try to put Clara in a preschool program a few days a week for a few hours a day so that I can regain my sanity.

I’ve researched some preschools, sent a few emails, and now we’re waiting to hear back.

This entry was posted in clara jane, motherhood and tagged motherhood, toddler. Bookmark the permalink.

16 Responses to From now on I’ll be shopping exclusively online.