Postpartum advice for the first 21 days

This is advice I most definitely did not follow after the births of my first two daughters, but this time around I took it to heart!

I first heard these wise words years ago from a more experienced mom (who was then pregnant her third darling baby!) friend when we were discussing all of the things we wish we could say to newly expecting moms but really can’t. And some of the advice that we wish we had heard. One of the things we focused on was how society, family, and friends seem to expect new moms to keep going at their ‘normal’ pace, even though being a new mom is so overwhelming that it’s impossible to continue on with life like that.

She shared this postpartum advice for the first 21 days, (the “21 day ‘rule”), which was passed along from another mom. She followed when her babies were newly home for the hospital.

Obligations, social plans, and errands can (and will) wait. Those first few weeks as a new mom should be spent resting and relaxing and nursing and snuggling and recovering with a newborn. 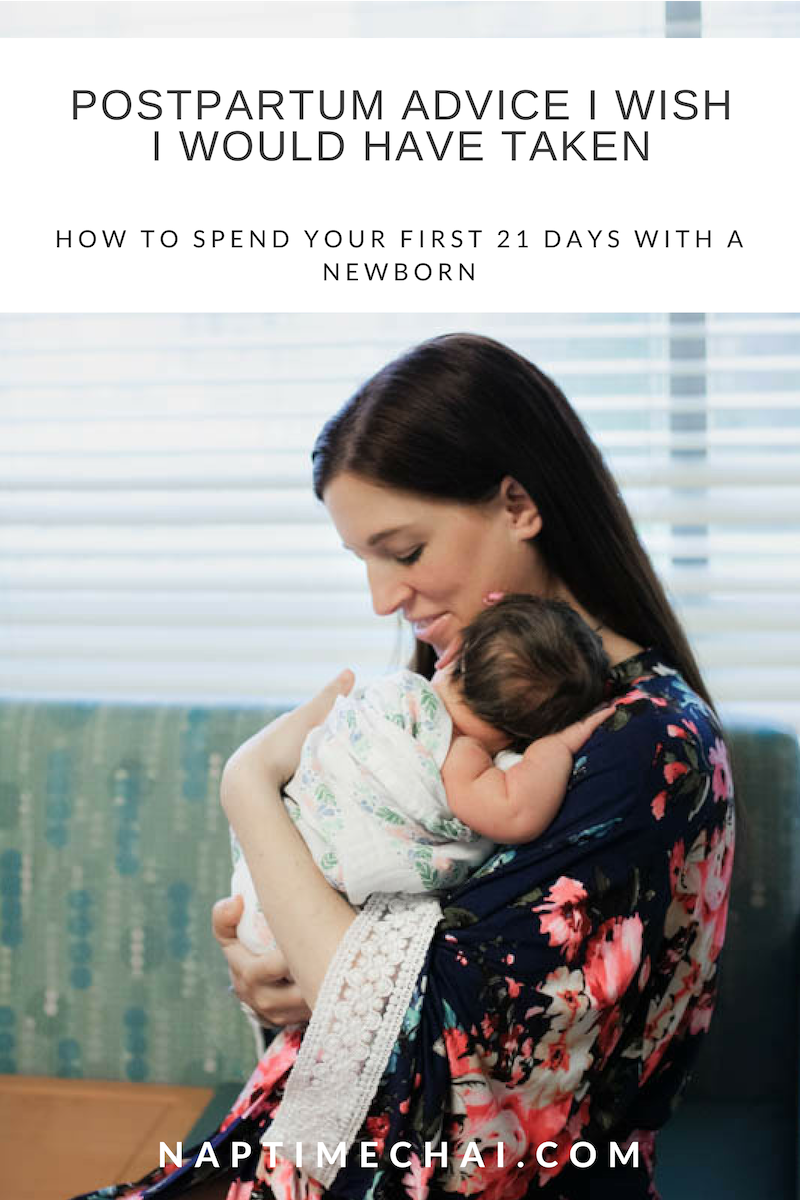 I recently read a (cook)book titled “The First Forty Days: The Essential Art of Nourishing the New Mother” and it talks a lot about how in many cultures, a mom is only expected to rest for the first month, if not longer, and her community surrounds her to make sure that can happen. I don’t need to tell you that in the USA we don’t have that structure in place for new families and new moms. Communities are spread out, fathers (generally) aren’t encouraged to take paternity leave, and sometimes moms are ‘forced’ to go back to work very soon after having a baby. But, I believe that most of us can create a system in which we snuggle our babies more and do less unnecessary stuff the first month.

It’s so much easier said than done, though.

After the birth of Clara (my almost-five year old!) I was convinced that having a baby should not and would not slow me down, so I kept up with my normal life pace to a certain extent. Tim got a month of paternity leave, so we hung around and watched a lot of TV (Clara was the world’s easiest baby and slept all month), but also entertained a lot guests, stayed relatively active, maintained a social life of some sort, etc.

After Isabelle was born, I was even more determined to keep up with life. With an almost-two-year old toddler also at home, we got out as much as possible. We entertained guests, went to playgrounds, walked to coffee shops, kept up with social plans… I don’t remember slowing down at all, really. (Although the first week or two I was in bed with spinal headaches, so that was some forced recovery. Even then, I still attempted to clean the house and do too many things.)

This time, I did it differently.

+ I recognized that I had major surgery (again!) and allowed myself to heal from that with a lot of sitting around. C-section recoveries are hard.

+ I realized that just because I mentally felt great and energized some days, physically I got tired if I took on too many things, so I said no to some things that seemed like they’d be too much.

+ I snuggled my very-sleepy newborn as much as humanly possible because I now know it really, really doesn’t last.

+ I delegated cooking, laundry, cleaning, toddler care, basically everything I could to my very-capable husband (who normally does a lot of this stuff anyways, but is now on paternity leave and can do even more! Yay!)

+ I spread out visitors and social plans so I only had one thing to do per day, if even! This allowed me to enjoy visits more and to relax in between plans.

+ I washed my face every day and sometimes even put on ‘real’ clothes so I felt good (mentally, emotionally, and physically).

+ I reminded myself that my only job was (and is) to heal my body and feed my baby. That’s it. Like 100% it. Everything else can be delegated or put on hold for the time being.

I am now almost a month postpartum and I’ll admit that the first 7 days I didn’t spend in bed, but I did spend on the couch, for the most part! (Where I spent almost all pregnancy, if we’re being honest!) The next seven days I spent the same way, but I took on a few additional tasks, like emptying the dishwasher, watching the girls so Tim can do other things… and I even changed a diaper or two, which I had managed to avoid the whole first week! Also during the second week we did do Easter activities with our church and attended our small group. During the third week we got outside a bit and I started moving around a lot more. We also went to MOPS and a social outing at a salon where I got a manicure while wearing Phoebe in a sling. So I guess I wasn’t really ‘near’ bed in some cases, but I tried!

Now I’m finally going a bit stir-crazy and (approaching the end of week 4!) am feeling more ready to enter into my normal life again, slowly

I am not, and never have been, great at relaxing, but I’m really proud about how I embraced a few weeks of rest in April! After a month with a newborn, I feel much better than I expected to feel!

If you need me, I’ll be on my couch snuggling the most squishy newborn for at least a little while longer.

This entry was posted in motherhood and tagged motherhood, newborn. Bookmark the permalink.